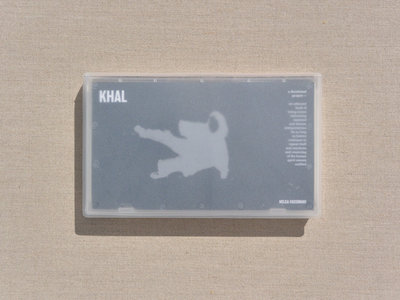 "Khal"… After the establishment of the Islamic Republic of Iran in 1979, Ayatollah Khomeini condemned all forms of music, other than classical and traditional Persian music as being corrupted and influenced by Western culture, and therefore, forbidden. During this time, Khomeini forbade women from singing solo in public because of "the seductive quality of the female voice"—a law which is still in effect today.

Helga Fassonaki began the "Khal" project in 2014 while living in Tabriz, Iran. Because the use of her voice as a woman in public performance was restricted, Fassonaki sent compositions in the form of sculptural scores to sixteen female artists and musicians living in different cities and parts of the world. The scores were interpreted and performed publicly by these artists in lieu of Fassonaki’s ability to do so.

These living scores were then passed on to additional female artists and musicians, creating an open book of socio-spatial exchange. As the series unfolds from one event to another, a cumulative composition of voices and actions will continue to grow until the law inhibiting artistic expression ceases to exist. This ongoing exchange and peaceful protest refers to the derogatory use of the Farsi word “khal,” coined to describe the passage of Iranian pop music in the form of homemade mixtapes. Once pop music was no longer being produced or sold in Iran after the Islamic Revolution, the Los Angeles Persian community sent mixtapes to residents in Iran so they could listen to their own country’s pop stars. Fassonaki remembers partaking in this movement when she was a kid residing in Los Angeles. The steady flow of cassettes soon became state-approved in Iran, an example that gentle poetic actions can push through governing law.

"Khal" was supported, in part, by a Foundation for Contemporary Arts Emergency Grant.